This site is listed on the Connecticut Freedom Trail 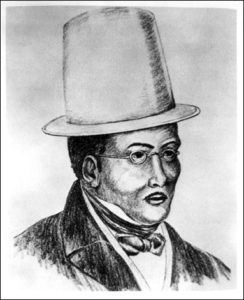 This courtyard was dedicated in 2015 in honor of David Ruggles (1810–1849), an abolitionist born to free black parents in 1810 and raised in the Bean Hill section of town. As a “conductor” on the Underground Railroad in New York City, Ruggles claimed in 1842 to have helped 600 individuals escape from slavery. Among them were Frederick Douglass and James Lindsey Smith. An accomplished journalist, Ruggles submitted hundreds of letters to abolitionist newspapers, published five anti-slavery pamphlets, and edited The Mirror of Liberty, the first periodical owned by African Americans aimed at black audiences. Ruggles continued to push boundaries by opening the first bookstore and reading room for blacks in New York City in 1834.

Ruggles’s bold anti-slavery rhetoric not only made him a hero among African Americans, but also a target of pro-slavery groups. Slave catchers attempted to kidnap Ruggles and sell him into bondage, and he was jailed multiple times for civil disobedience. In his later years living in Florence, Massachusetts, Ruggles was part of a utopian community along with abolitionist Sojourner Truth. He opened a hospital to treat patients using hydrotherapy. Suffering from multiple health issues, he was nearly blind by twenty-eight and died in 1849 at the age of thirty-nine. He is buried in an unmarked grave in the Ruggles family plot in Norwich’s Yantic Cemetery.