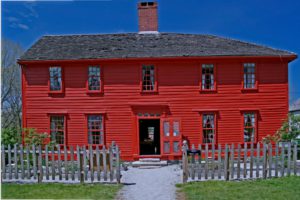 The Leffingwell brothers, Christopher and Elisha (grandsons of Thomas Leffingwell, who opened the famous inn in 1701), were entrepreneurs bar none in colonial Norwich.  Cocoa beans (a.k.a. “chocolate nuts“) were imported to U.S. ports, and appeared in Norwich as early as 1766.  In 1770 the Leffingwell brothers opened a cocoa-mill.

“Poco-Loco For Cocoa” was inspired by a 2009 E-Mail from Beryl Fishbone, which stated: “Chocolate nuts“ were off-loaded, roasted, shelled and ground into chocolate when the ships reached North American eastern ports. The resulting chocolate was irregular in appearance and slightly gritty in texture but when mixed with hints of cinnamon, vanilla and nutmeg, milk, sugar and water it was ready to be drunk as a staple with any meal, as a military ration and used as a medicine. By 1773 colonial demand for chocolate exceeded 320 tons annually.

Since cocoa beans grow in Central and South America, the commercial for Cocoa-Puffs cereal triggered the “cuckoo for cocoa” line, and the calypso beat just evolved from the subject matter.

Here is a link to the Leffingwell House Museum’s page: http://www.leffingwellhousemuseum.org/

Here is a link to The Nibble’s page regarding the history of chocolate: http://www.thenibble.com/reviews/main/chocolate/the-history-of-chocolate.asp

Click below to listen to Audio for “Leffingwell Inn“

Click below to listen to the song “Poco Loco For Cocoa“